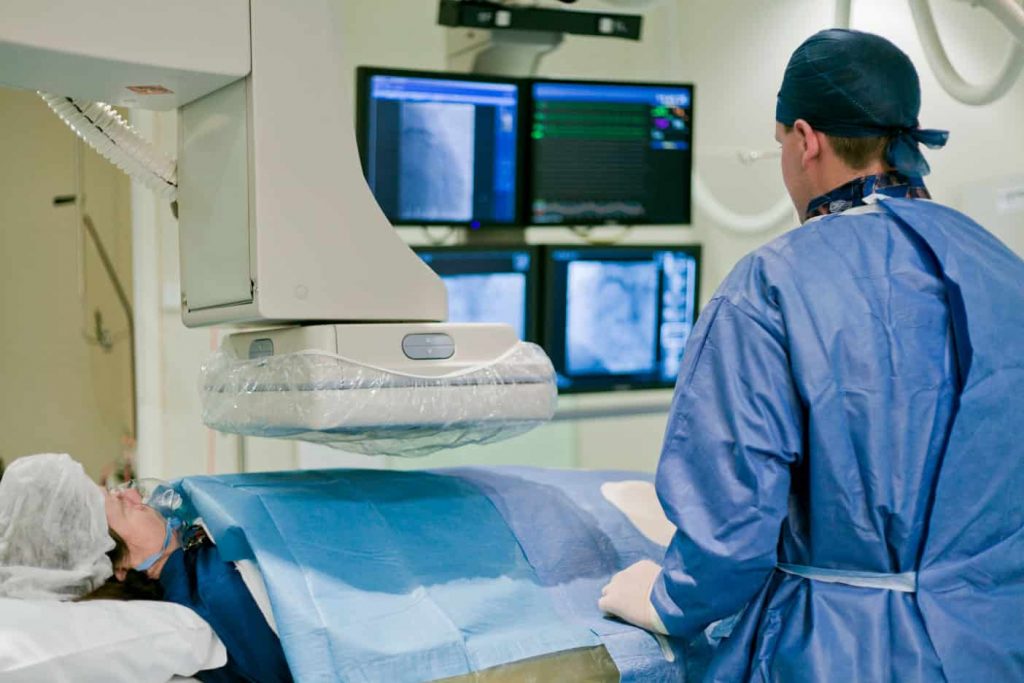 Currently the most widespread and accepted strategy for treating atrial fibrillation is by electrically isolating the pulmonary veins,  therefore reducing the risk of triggering atrial fibrillation. This electrical isolation is achieved by a procedure called ablation. Ablation is performed by a cardiologist who is specialised in invasive investigation and treatment of heart rhythm problems (electrophysiologist) and is performed in a specialised electrophysiologic (EP) lab.

How it is done

Ablation is a minimally invasive, closed-chest procedure. Through small punctures at the groin, the physician introduces multiple flexible tubes (catheters) into the femoral vein which are advanced under X-ray fluoroscopy to the right atrium. To reach the left atrium, the physician uses a long needle to puncture the wall separating the right and left atria, and then introduces the catheter(s) into the left atrium.

Irrespective of the technique used, pulmonary vein isolation is performed either with the patient under a general anaesthetic and artificially ventilated or with sedation but breathing spontaneously.

The commonest technique uses a high frequency alternating current (about 550 KHz) delivered by a flexible catheter with a metal electrode at the tip. Current passage heats the tissue creating a ‘lesion’. A series of continuous lesions in a circular design at the junctions of the right and left sided pulmonary veins results in an electrical isolation of the pulmonary veins from the left atrium.

Electrical isolation is verified by the persistent disappearance of electrical signals in the pulmonary veins and the catheters are then removed. 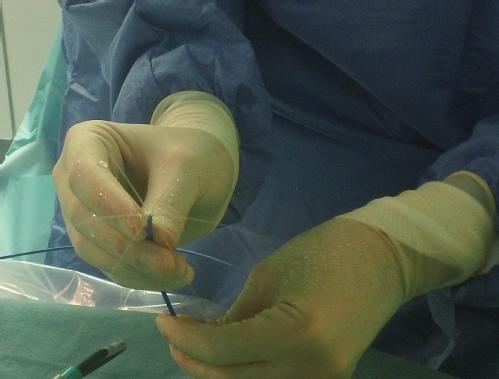 There are many ablation techniques that have been introduced during the last decade, despite this pulmonary vein isolation is still the basis of atrial fibrillation ablation. Nevertheless, in specific situations, your physician may opt to perform additional techniques to enhance the procedure success.

An ablation is now a routine procedure, the catheters and techniques have developed enormously in the last decades and the complication rates have decreased. However there are still risks and both the patients and the physicians have to be aware of them.

The commonest complication is bleeding from the puncture site in the groin, resulting in collection of partially coagulated blood under the skin or deeper (hematoma), which is frequently tender or painful. Manual compression and bed rest is usually enough and the collection progressively disappears over the next few weeks. If at the puncture site, a lump appears suddenly or enlarges and becomes painful, the patient should seek medical attention.

A more severe but unusual complication is a transient ischemic attack (TIA) or stroke. During or after the ablation a clot can be dislodged from within the left atrium and migrate to any of the systemic arterial blood vessels, more often to the brain, blocking the delivery of oxygen, and producing tissue death, this can result in a stroke.

To eliminate the risk for stroke and TIA any patient who is scheduled for an AF-ablation is prescribed anticoagulation drugs for at least 3-4 weeks before the procedure and until at least 4 weeks after the procedure or until the follow-up appointment. Moreover, most physicians perform transoesophageal echocardiography or CT angiogram within 24 hours before the procedure to be sure that there is no clot in the left atrium. Anticoagulation drugs are also given to the patients during the ablation. Consequently the risk for stroke during an ablation is less than 1%.

Another severe but rare complication is cardiac tamponade. During the procedure the manipulation of catheters can unfortunately lead to damage to the wall of the heart, resulting in blood collecting inside the sac around the heart (pericardium). This is a life-threatening situation that demands prompt treatment. In most cases, a needle puncture from just under the breast bone can be used to introduce a tube-catheter into the sac around the heart to drain the blood. This is usually enough to restore normal circulation. The complication rate for cardiac tamponade is approximately 1-2%.

Damage to surrounding tissue outside the heart, including nerves and the oesophagus,  can also occur . The nerve to the diaphragm (an important muscle for breathing) can be damaged, more frequently by cryoballoon ablation, resulting in shortness of breath but usually recovers spontaneously within weeks to months. The oesophagus, which is located just behind the back wall of the left atrium, can be damaged by high or low temperatures within the heart. Rarely (about 1 in 4,000) a hole with a communication between the heart and the oesophagus can result with severe consequences.

Although the rate of complications are low, it is important that you promptly contact your doctor should you have concerning symptoms after an ablation.

Recovery and restrictions after ablation

After the procedure, a compression bandage is applied to the groin for a few hours to stop the bleeding. Bed rest is very important for the first few hours after an ablation. Discharge from the hospital usually happens the day after the procedure on condition the bleeding has stopped and you feel well.
After discharge, you can progressively resume a normal life in the absence of complaints. Nevertheless, strenuous efforts and long trips should be avoided in the first 2 weeks. Your doctor will give you clear instructions regarding getting back to work, training and traveling, which are tailored to your personal circumstances.

You will need to continue anticoagulation drugs (to prevent clots) for at least 4 weeks after the procedure. You should follow your doctor’s instructions, as recommendations vary depending on local protocol. Often, some additional medicines are prescribed to control the heart rhythm and rate. If you have taken antiarrhythmic drugs before the procedure, your doctor will decide whether it is possible to stop the medication. Alternatively it may be recommended to continue these and re-evaluate ongoing use during follow-up. Usually, an electrophysiologist or cardiologist performs a cardiac evaluation including an assessment of residual arrhythmias (fibrillation/flutter), cardiac status and prescribed medication, at 4 to 12 weeks after the procedure.

After 12 weeks have elapsed (to allow time for the effects of the ablation procedure to stabilise), in the event of recurrent palpitations and ECG documentation of atrial fibrillation or flutter, you may be prescribed additional or previously effective anti-arrhythmic drugs and eventually recommended a repeat ablation procedure. In cases of paroxysmal atrial fibrillation successful outcomes are observed in 70- 80% after the initial procedure, an additional procedure leads to suppression of arrhythmias in more than 85% of cases. Single procedure success rates are lower in patients with persistent atrial fibrillation.

Learn more about: “How should I change my life?”